2014 has started and I can’t help but feel like the air has been violently removed from my bubble. During the past few weeks, Africa has become a less tolerant place for its LGTBIQQA citizens.

First, the Ugandan parliament passed a bill that proposes lengthy sentences for both same-sex loving people and their supporters just before Christmas. It was audaciously called an early Christmas present to the people from the parliament. The good news is that Uganda’s president Yoweri Museveni, has since refused to sign the bill into law. His reasons, according to this article, don’t exactly inspire hope for the future of LGTBIQQA citizens of Uganda.
The second and similar problematic thing is the unannounced but expected signing of the Same-sex Marriage Prohibition Act by Nigeria’s President Goodluck Jonathan early in January. The act was adopted and passed by the legislative branches of government in 2011 and 2013. Consensual sex between adults of the same sex was already criminalised in Nigeria, with punishments as severe as death in some northern states where sharia law. What this new law does is to even criminalize groups that advocate for gay rights in Nigeria.
While all this has been happening, a transsexual friend of mine who lives as a woman was arrested for using a female toilet in Bulawayo. The case was thrown out by the judge. Also in Bulawayo, a GALZ sponsored Christmas party was raided by the police and several prominent figures within ZANU PF’s Youth League were outed to the party structures. No charges have been filed but they still live in fear.
Meanwhile, South Africa, seen by many as a beacon of hope when it comes to gay rights in Africa, has remained silent. International condemnation has been loud and quick. Petitions from all over the world are littering the internet. And still South Africa remains silent. There are serious discussions about reform of the United Nations Security Council to include a permant seat for an African country. The top two contenders are South Africa and Nigeria and that saddens me. We cannot allow African countries that don’t respect or protect African LGBTI rights the privilege of representing the continent on the Security Council. The time has come for us to speak out and stand up for our rights!

It’s been ten days since Tata Nelson Rolihlahla Mandela passed away. Like the rest of the world, I’ve mourned the passing of a great and inspirational leader and human being. I’ve cried and sung and danced with those mourning him across South Africa. But I’ve also taken the time to examine what his legacy means for me as a young black gay African man. 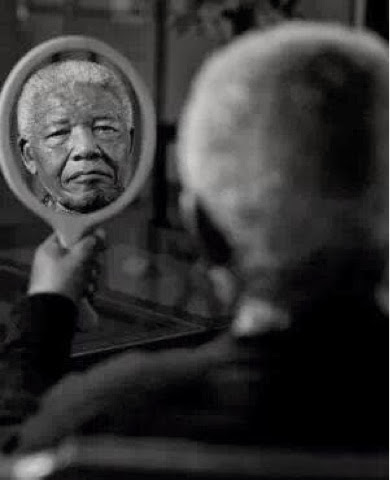 In his autobiography “A Long Walk to Freedom,” Nelson Mandela wrote about the Universal Declaration of Human Rights (UDHR) and how it drove him to continue in the struggle against Apartheid. Of particular value to him and his defining philosophy was the first article which declares: “All human beings are born free and equal in dignity and rights.” The South African Bill of Rights proudly guarantees and promotes that equality. South Africa became the first and, to date, only Afican country that explicitly protects the LGBTI community from discrimination when a new constitution was signed into law by Mr. Mandela in 1996 leading to the eventual decriminalisation of sodomy in 1998 and the legalisation of gay marriage in 2006.
However, having said all this, it cannot be forgotten that Mr. Mandela was a man of his time. He was educated at a conservative Jesuit mission school, he spent many years in prison where homosexuality is used as a tool for abuse and control, he never once vocalised support for the LGBTI community and most shockingly he never spoke out against the horrific practice of what has come to be known as “corrective rape.” It’s a complicated and difficult reality to reconcile with the image of Mr. Mandela as the heroic saintly champion of equality. Moreover, he never used his status as a elder statesman in Africa to challenge his fellow leaders to respect and protect the rights of their own LGBTI communities.
I am not trying to speak ill of the dead or minimise the enormous impact Mr. Mandela has had in South Africa, in Africa and across the world. But I believe it is important to fully examine his life so we can learn from and be fully inspired by his legacy. I am moved daily by his message of love, hope, forgiveness, tolerance, reconciliation and justice. I can only pray and wish that when my time has come, I would have lived a life only one tenth as inspirational as Mr. Mandela’s. I’d like to finish off by quoting Mr. Mandela himself:
“No one is born hating another person because of the color of his skin, or his background, or his religion … if they can learn to hate, they can be taught to love.”

I am an African, not because I was born in Africa, but because Africa is born in me – Kwame Nkrumah

What does it mean to be African? Is there really a definition for African? Africa is such a diverse continent with over 50 countries and over 2000 languages. This incredible diversity makes it very difficult and perhaps mischievous to define an African. However there’s a sense of unity as you travel across the continent derived from the concept of Ubuntu or Hunhuism. Ubuntu is an ethical philosophy that affirms the humanity of everyone, but most especially the “other”, the outsider, the visitor. My humanity is measured by how I treat others. This concept, that is almost universal across the continent, is what gives rise to sayings like “everyone’s child” and “it takes a village”. There’s an inherent warmth that Africans have for everyone, family, neighbours and strangers alike. I love how no matter where my travels have taken me on the continent, I can walk into almost any home and be received warmly with a glass of water and an offer of food. Until they realise I’m gay.

LGTBIQ Africans seem to be the only exception to Ubuntu. We are not accepted or received with warmth and respect. In fact leaders of every shape and form take it upon themselves to demean and dehumanise us with harmful and, oftentimes, violent rhetoric. We are called un-African, a perversion of African culture and a manifestation of Western society. We are called “worse than pigs and dogs”. We are called “the biggest threat to humanity”. We are threatened with beheading, arrest, deportation, land dispossession and a myriad of other crimes. Where is Ubuntu in all of this? How is my humanity being affirmed by all of this? How can I be expected to respect and honour my culture when it is used against me?

There are Africans who are challenging this attitude; LGTBIQ Africans who are using Ubuntu and their cultures to stand up and be counted as African. But they are too few. I wish I could say I was one of them. I wish I could courageously and selflessly be out there fighting for inclusion and respect. I’m too afraid I guess. But step by step, I’m allowing myself to come out and be counted. This blog is part of that journey for me.

It’s the election season here in Zimbabwe, and for us men and women of the same-gender-loving persuasion that means undue and unjust harassment and political scapegoating. Usually, it’s just a few articles in the government mouthpiece the Herald and its sister publications. However this time round the homophobic and violent rhetoric has been stepped up. First the GALZ (Gays and Lesbians of Zimbabwe) 44 were arrested, detained without charge for nearly 48 hours and tortured in August last year. And then there was the bizarre incident in June where the GALZ offices were invaded by thugs wielding hammers and other weapons. This time the Zimbabwe Republic Police, renowned for unexpected and random raids on GALZ, came to the rescue and promptly arrested the thugs. No word yet on what has happened to the thugs. And then this article comes out in the Herald’s Features section last week, where the author uses the article to coin the new word “gayism” and paint Harare’s eccentric artistic scene as a gay recruitment centre.
All these attacks and many more have happened in the full view of the private media and other civic society groups, and yet very few of them step up to defend GALZ and its membership. But if we look at what else has happened in Zimbabwe since August 2012, we see a steady stream of other NGOs and civic society groups being raided, their members being arrested and their activities being disrupted. The list includes groups like WOZA, ZPP, ZimRights, ZCTU, NANGO and people like Beatrice Mtetwa. At a time like this, I always remember the wise words of the late German anti-Nazi theologian and Lutheran pastor Martin Niemöller:

I guess I should start with the why. Well, like many bloggers people, I think my life is important and unique enough that other people would want to read it. I’m gay and Zimbabwean and living within the borders of this amazing country. I have traveled the world and lived in other countries (more on that later) but as Dorothy said “there’s no place like home.” And so I’m back in Zimbabwe trying to eke out a life for myself.

Contrary to popular opinion, Zimbabwe is not a violent country. Don’t get me wrong, there are human rights abuses that include torture and arbitrary arrest, but on the whole life here is peaceful. You won’t hear of or see gay bashings. Correction, I’ve never heard of or seen gay bashings. That doesn’t mean that life isn’t difficult and lived mostly on down low. It is a way of life here. My family and friends have known for years that I was I gay and I have a boyfriend (more on him later). We go out together, but you’ll never catch us in public displays of affection. There are certain bars and clubs that have become gay hangouts but you wouldn’t catch them advertising as such.

That is the background from which my confessions and musings shall spring. They may come as fast bursts or slow trickles, but hopefully they will show the world what it is like to be gay and living in Zimbabwe.